FILM REVIEW: ‘Jungle Cruise’ While Bumpy At Times, Is a Fun Adventure Ride

About 20 years ago, the worlds largest film studio/theme park owners, Disney, attempted to turn one of their classic attractions into a motion picture. The film was a little thing called Pirates of the Caribbean – the perfect combination of action, comedy, thrills all topped with an iconic performance from Johnny Depp. While many had their doubts, including me, the film was a surprise hit – raking in over $300 million at the box office. Of course, since then, the studio has attempted cash in on its popularity with a handful of other rides turned feature films with diminishing results. Haunted Mansion, Tomorrowland and what feels like about a dozen Pirates sequels could never recapture the magic.

Which is why when Disney announced they were going to try yet again to create a film revolving around one of their amusement park rides, this time Jungle Cruise, you could hear the industry and public’s eyes rolling. How do you base a film around an 8-minute ride full of puns, animal attacks and questionable, if not racist, imagery and references?

The studio had its work cut out for them. Casting two of Hollywood’s biggest stars working today, Dwayne “The Rock” Johnson and Emily Blunt, was a step in the right direction. Add to that a trailer promising a rip roaring, old school adventure and suddenly it looks like there may be wind in the old theme park ride turned feature sails.

The end result is a fun family adventure reminiscent of films like Romancing the Stone, Indiana Jones, The Mummy, African Queen, and Pirates of the Caribbean: The Curse of the Black Pearl that does everything it can to entertain us. The key word here is fun. For the most part it succeeds delivering the fast-paced action, thrills and laughs you would hope for. The film has a lot of energy that flows from scene to scene, providing something for everyone. Which is one of its biggest problems – the eagerness to do just that. Director, Jaume Collet-Serra, is tasked with making this film everything for everyone leaving us with a story is more complex and cluttered than needed. While it squeaks by in its current form, there is a much better film here if we leave some scenes, plot points and characters in the cutting room floor. 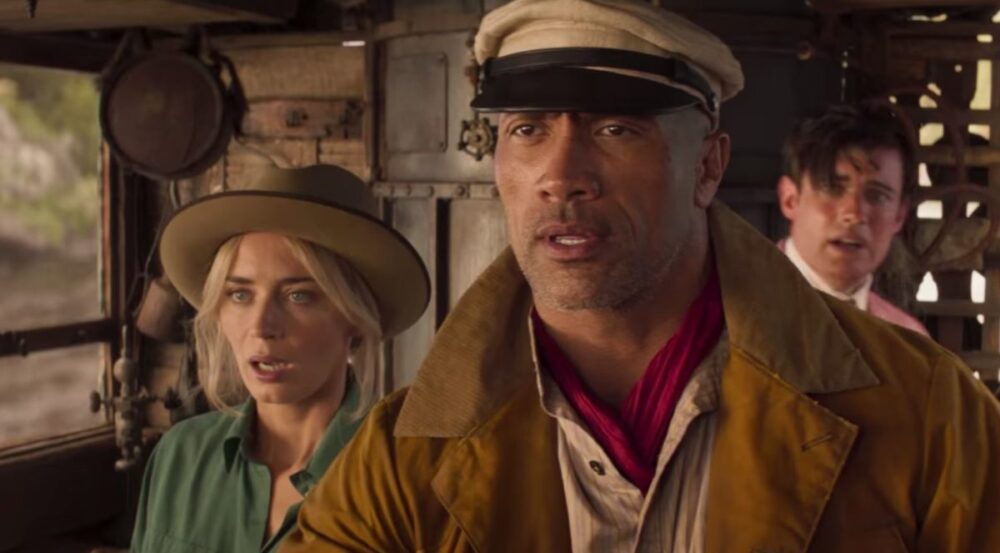 As I try to gather my thoughts I realized how just trying to explain the convoluted plot exposes the film’s biggest weakness. It plays like an overanxious tour guide filling every second with schtick, it would have benefited a little breathing room so you could enjoy the scenery. I am not sure where the problem originated, but I am assuming it comes from up high in the hierarchy. Probably with studio execs not confident enough in creating something unique Instead, they attempt to capture the magic of other successful films (in this case the Pirates of the Caribbean). By hijacking elements and mashing them together with a simpler idea you get a Frankenstein-script (tipped off by the long list of writers) with a little bit of this and a little bit of that – with varying results. It takes a skilled director to wrangle it all in and Collet-Serra partially succeeds.

So, back to the plot. It should have been simple. An uptight but adventurous scientist (Emily Blunt’s Lily Houghton) hires a fast-talking, pun-swinging steamboat captain name Frank Wolff (Dwayne Johnson), to take her on an adventure to locate a mysterious much sought after McGuffin (this time a magic flower or something) that will change the world for the good of all humanity. They encounter unexpected danger at every turn including a relentless Nazi hot on their tails who wants the same McG for much more nefarious reasons. Will they finish their quest or will the Nazi and the jungle get them first? Find out in Jungle Cruise. It’s got comedy! Adventure! Thrills! And maybe even some romance. For the most part that’s all in the film – which is great.

But wait, there’s more. A lot more. Ancient curses, excessive backstory and a band of CGI villains (lead by the completely wasted Édgar Ramírez) that they continue to attempt to be crowbarred into the film leaving me always thinking, can we get back to Emily and The Rock again please. I cannot imagine anyone actually caring about any of it. I surely didn’t. As they would reuse costumes back in the days of old Hollywood, these villains look like the leftovers from the previous Pirates films, pulled out of the closet and used haphazardly.

I have little positive (if any) to say about them. For that reason, I will not harp on that aspect too much right now, because and when it comes down to it even they could not sink this throwback to the 80s & 90s adventure film. What keeps it afloat are the talents and chemistry of Johnson and Blunt. They throw sarcastic jabs as while the adventure keeps unfolding around them. Whenever they are on screen I was having a grand time. Their banter satisfyingly entertains as we travel from set piece to exciting set piece – waterfalls, tribal attacks, underwater adventures and more. Both Johnson and Blunt pull off the physical side of things quite well – which should be expected when looking at their filmographies. Johnson does not feel like the perfect fit at first, but eventually settles into the role as it becomes more action heavy. Their inevitable romantic turn doesn’t land as well and feels forced. Along side them is the surprisingly entertaining character, MacGregor Houghton (Jack Whitehall) – the stuffy, fish out of water brother to Lily who delivers plenty of laughs while adding a little unexpected heart to the film.

Notable other cast members include the Paul Giamatti in an odd role whose accent and purpose still have me scratching my head. Then there’s the German Prince Joachim played by a delightfully campy Jesse Plemons. His pitch perfect villain, walks right at the very brink of over-the-top and hovers there, making him a joy to watch. While this mustache-twirling nemesis is a blast, he is a bit under-developed, probably due in part to the time spent with the unnecessary CGI villains mentioned above.

Speaking of which, back to the magic flowers and villains. The film’s problems lie in its excess. Sometimes less is more is a good rule to making movies. When you hear the production budget was $200 million dollars for a jungle river adventure – you can assume that rule was not followed. Once we get deeper into the jungle you see where the money was spent – and quickly realize it would have been better saved for a rainy day.

Sure. the scenery is breathtakingly beautiful at times. I am not sure where the CGI begins and the real life jungle/physical props end. That is until they break the illusion. Practical effects are too quickly abandoned for digital camera moves and animation. When you are in the middle of the jungle, but feel like you are in a video game – there’s a problem. The camera whips around and moves us through scenes in the most unnatural of ways. It dehumanizes what’s on screen and is a constant reminder that this is all pretend. Classic film cinematography would have been much more effective. The illusion is broken and no matter how perfect the CGI, the trick has been revealed – the magic is gone.

This film would have been the perfect opportunity to pull off some old school stunts and effects. Think back to any of the first three Indiana Jones movies, Romancing the Stone or even the original Pirates. The thing that people remember most fondly are the practical effects not the CGI, or at least those moments that blurred the line between the two. Indy climbing onto a fast moving Nazi tank, Captain Jack riding his sinking ship into port. Those are cinemagic moments. Jungle Cruise should have been full of them. Instead most are gutted with soulless CGI. Let me say it again in different terms – just because you can doesn’t mean you should.

Let me pile more – the never believable CGI tiger sidekick, an illogical (although admittedly fun) submarine, and that unsightly gang of CGI villains comprised of snakes, honey, bees and who knows what else because I stopped paying attention to them. Ugh. Make it stop. And yet, still, with all that working against it and some strangely incorporated Metallica music, I had fun.

The film includes some entertaining, direct-from-the-Disney-theme-park-ride references and easter eggs that Disney-holics will get a kick out of them. They are a slightly awkwardly fit and land much better on the ride than in the film. But hey, why not? This was meant to be a pleasure cruise and much of the excursion is from beginning to end. There are pulse racing moments, colorful characters, and witty dialogue. It makes for an enjoyable ride with some ups and downs, even if, like an amusement park ride, you will leave with a smile even if you forget about it shortly after.

If they avoided trying to be a carbon copy of Pirates (and the CGI) and focused on the strengths of the cast and the old school adventures that inspired it, I think we could have ended up with a modern family classic. While a sequel seems inevitable, I did appreciate that the film plays off like a stand alone with a conclusion instead of an until-next-time. While it does hit few bumpy rapids along the way this journey is worth taking. Sure this cruise is overbooked, bogged down by too many villains, and probably has too many captains steering this ship – still, families will enjoy it.