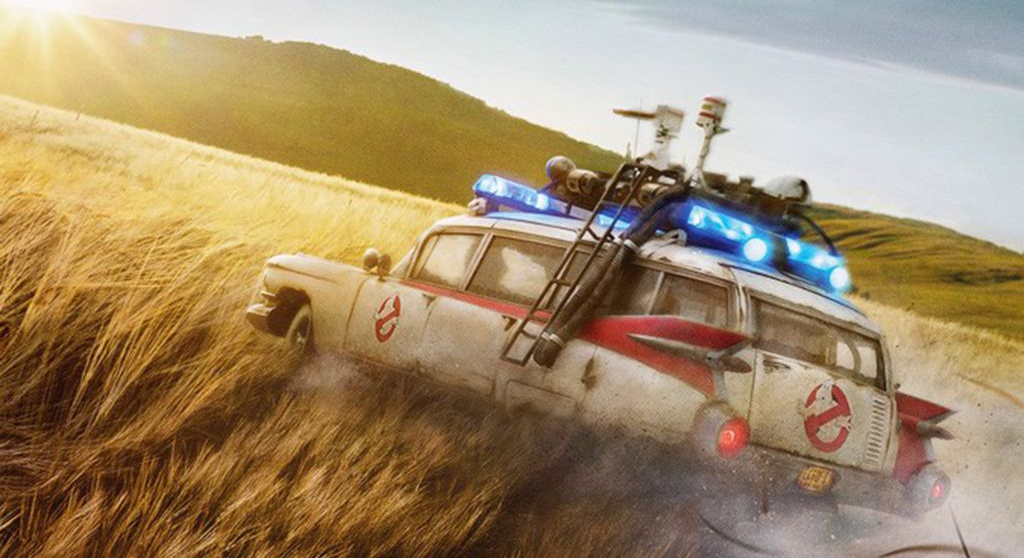 Film Review: ‘Ghostbusters: Afterlife’ Is a Spirited Adventure For Generations of Fans

The original 1984 Ghostbusters film was a smash hit and is widely considered a classic – chock full of iconic dialogue, performances and imagery. For people of a certain age, you cannot see a tan jumpsuit or even a marshmallow without thinking of Ghostbusters. And if you are at a karaoke night where someone doesn’t own the crowd with a rendition of the awesome Ray Parker Jr. theme song, then you can hardly call it karaoke night. The film holds a special place in the hearts of many.

But after the meteoric rise the franchise has stumbled at best. The original was followed up with a very standard sequelesque sequel that has all the markings of a typical 80’s/90’s forgettable followup. For three decades to follow there were rumors of scripts and one last ride for the OGs, Dan Aykroyd, Bill Murray, Harold Ramis and Ernie Hudson. An interview with Aykroyd was not complete without him mentioning his latest attempt to launch a third Ghostbusters film. With Murray rumored to be the lone hold out, fans were left waiting with only an animated series, video games, Ecto Cooler Hi-C, a hauntingly sweet breakfast     cereal and tons of merch to hold us over. For decades, the Ghostbusters were missing in action.

That is until the news dropped that director Paul Feig (Bridesmaids) would reboot the franchise. All was well in the world for Ghostbusters fans. That was until it was announced that the new film would not include the original cast, but also would be an all-female led Ghostbusters team. Sadly, sight unseen, insecure baby men fans turned the situation toxic. Now the discussion about that film is now about if it was any good, but about the reaction to it online. The film received mixed reviews. It didn’t work for me.  Honestly, in my eye the Ghostbusters began and ended with the 1984 film (oh yeah, and with that delicious cereal.)

That is until now. I had the opportunity to go to attend the Ghostbusters: Afterlife panel at New York Comic Con. The event was truly a family affair; on hand were generations of Ghostbusters fans (I was seated next to an infant, dressed for the occasion), the father-son producing team of Ivan Reitman (who directed the original) and Jason Reitman (who directed Afterlife), and the cast of new characters, the next generation of Ghostbusters was in that room. The event was the perfect way to kick life back into what some people considered a ‘dead’ franchise.

The best part was the NYCC panel consisted of more than a Q&A accompanied by a couple of exclusive clips; Jason Reitman announced that he would screened Ghostbusters: Afterlife in its entirety. The crowd, as you would expect, went wild. After years of waiting for a worthy sequel, I’m happy to say the Ghostbusters are back! Afterlife is a load of fun.

Afterlife breathes new life into the beloved franchise while honoring the past. It begins a new chapter story – instead of disposing of the legacy (as seen in the 2016 version) the film cleverly becomes an extension of it. There is an obvious reverence for the OG while still having something new to say. This is also not a carbon copy as was Ghostbusters 2. That film felt uninspired, retreading familiar territory and cursing the world a painfully bad Bobby Brown theme song. The Reitmans deliver a Ghostbusters film for a new generation – it feels fresh and promising.

Since this is an early review I tiptoe around many of the details to allow fans to experience the bigger moments for themselves. So unless you want to go in with a 100% blank slate, you can read forward ahead without fear of spoilers.

The film is set in modern-day Oklahoma where Callie (Carrie Coon) and her two children, Phoebe (McKenna Grace) and Trevor (Finn Wolfhard) move after the death of their estranged grandfather. They inherit his house and move there for a much needed fresh start. What they find is that there is more in store for them than they had planned. In addition to inheriting the house, they inherit his debt. And the house… let’s just say it is a fixer upper. It is rundown, covered in dust cobwebs and the bizarre rantings of a man who seemingly lost his mind. As they further explore the kids find strange scientific experiments which intrigue the very science minded Phoebe and her new podcasting friend, aptly named Podcast (Logan Kim).

The kids serve as our avatars unveiling more odd experiments and artifacts of his mysterious past life. They soon learn what we have known all along, he was no ordinary grandpa, he was a real Ghostbuster, Dr. Egon Spengler to be exact (the character played by Harold Ramis before his passing). They are joined by Trevor’s crush Lucky (Celeste O’Connor) and Mr. Grooberson (Paul Rudd), a science-loving schoolteacher who has been tracking the unexplained tremors hitting the area. Of course there is more to the situation than initially expected – very evil energy is close at hand. And, if you guessed that our new team of youthful heroes is going to have to stop it, you catch on quickly.

Reitman aims to please, providing a Ghostbusters 101 as we watch them learn the ins and outs of their grandpa’s ghostbusting past. He finds a good balance of revisiting the source material while always keeping the story moving. Proton packs, ghost traps, the Ecto-1 and many more familiar things make appearances. Returning enthusiasts may become a little anxious waiting for some actual ghostbusting, while newcomers will be thrilled as they watch the characters explore all the qualities that make a Ghostbuster. 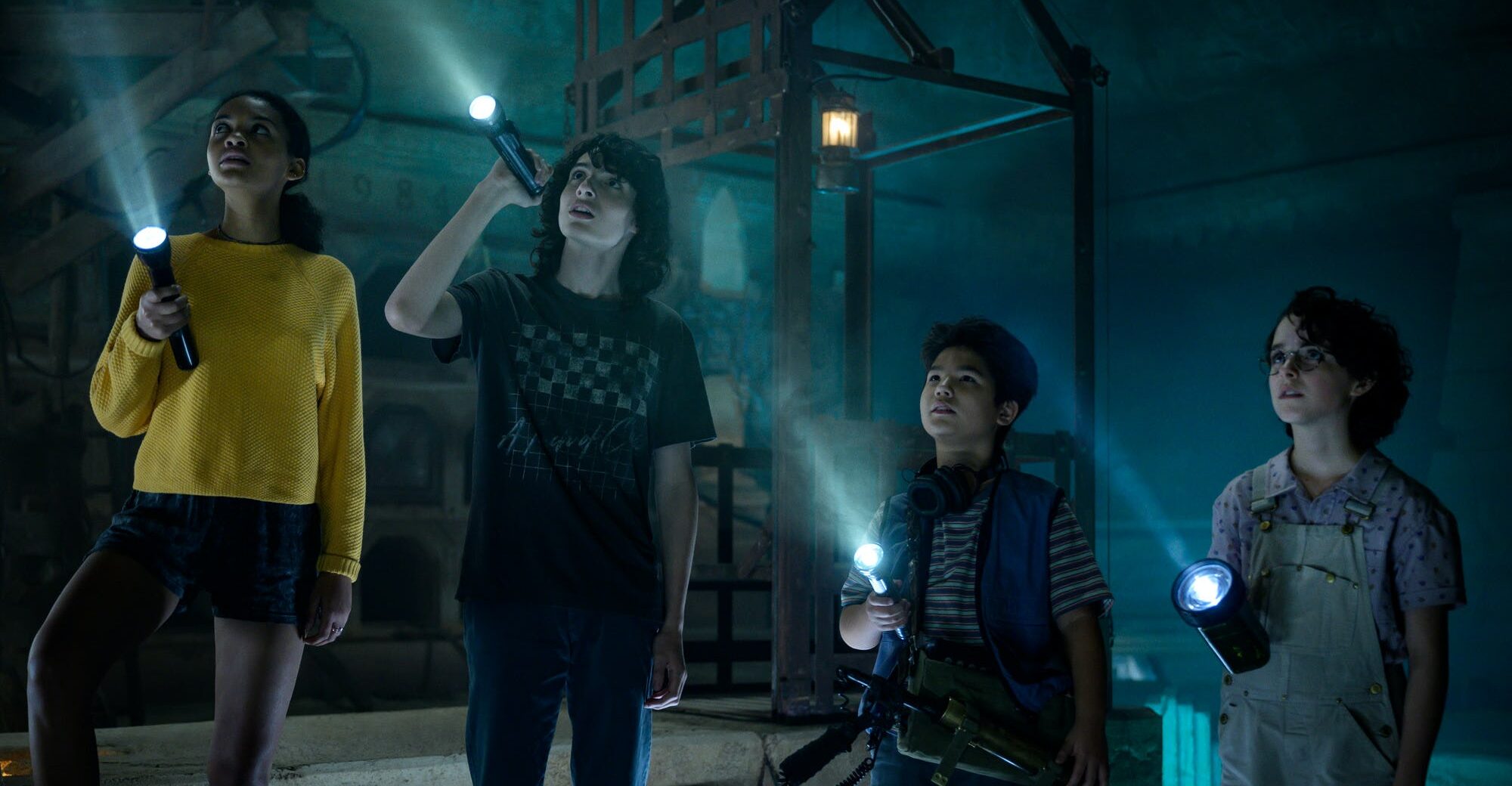 After nearly 40 years, the nostalgia drops are plentiful and for the most part welcome. Many feel almost necessary to guide newcomers, others feel like a bit of an over indulgence. Where it lands on the scale for you is fairly subjective – judge for yourself. Combining the revisiting of the past with the wonder and awe of the youth invigorates the film, giving it more weight than you’d expect. It is a coming of age adventure fueled by legacy rather than just a trip down memory lane for the sake of sentimentality. It hard to deny that mid-80s vibe is strong, striking the same notes as films like The Goonies, The Explorers, Stand By Me – and even the Stranger Things which also attempts to capture the 80s feels. Perfectly mashing up the wonders of youth with the excitement of Ghostbusters.

There are moments that may play a little too cute, pandering to the loyal fans who eagerly awaited a true sequel for decades. While they worked well with the NYCC crowd, once removed from the excitement of a sneak peek screening or on repeat views, I wonder if they will lose a little of their luster. In comparison, I recently watched another long-awaited sequel (which will remain nameless) and it only made me appreciate the Reitman’s touch when walking the line between fresh and nostalgia trip. It is here where Jason’s expert filmmaker craftsmanship shines through.

Still, Jason Reitman stays faithful to his father’s film, and at times maybe a little too faithful – you’ll see what I mean. Aspects of the film feel a bit too familiar and bigger swings could have paid off even if only for the sake of originality. When certain familiar faces appeared in the trailer, I was worried. Luckily for that low-hanging fruit does not overpower the bolder moves made here. 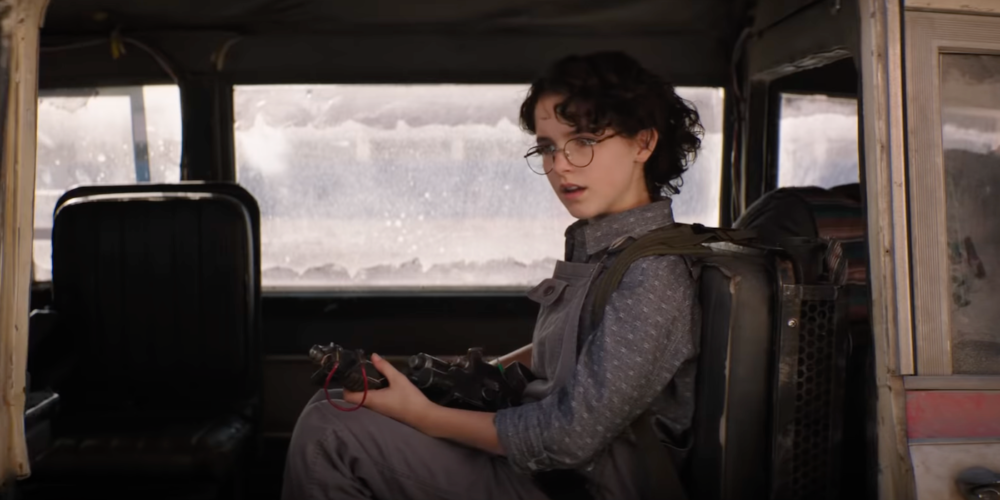 The characters are all welcome additions and I was wrapped up in the story from beginning to end. It is a pleasure watching them put the pieces together in a transformation from small town kids to Ghostbusters. Mckenna Grace steals the show – her sweet and nerdy, science joke-telling, girl-power Phoebe provides younger viewers a modern kid hero to root for. She channels enough of grandpa Egon both in the character and mannerism to be a proper homage without overplaying the hand. Wolfhard, O’Connor and Kim round out the charming new team of youngsters and all add different flavor to the mix. As the elder member of the new GB team, Paul Rudd delivers some classic Rudd manchild – a perfect fit for the part. He and Carrie Coon also tap into a nice romantic-comedy chemistry that fits in well. Coon, gives a strong, wide-ranging performance as a mother trying to salvage her family situation.

The Ghostbusters films have always been a blend of physical and verbal comedy, horror and adventure. Afterlife delivers on all fronts. Since the film is aiming to also connect with a younger audience, the humor does tend to aim on the tamer side. There are plenty of laughs to be had, especially some strangely cringe-educing visual comedy that had the audience unsure how to react – in a good way. And just because these are kids, they do not skip out on the action – including a thrilling joyride of the Ecto-1 straight down Main Street which is a blast, literally. We get a few good scares too. Like the original, no one is going to have nightmares over them as they are mild and disarmed by humor.

One nice touch was the use of practical special effects throughout the film. Not only do they tend to trigger more of a reaction because they feel tangible, they also maintain an aesthetic connection with the 1984 film. My fear with any classic property being revisited is an over-reliance on CGI. Even though there are plenty of obvious moments where Reitman used CGI – it would almost be impossible not to these days – they are relatively sparing and do not detract.

Overall this is a kindler, gentler Ghostbusters film and that should not scare off loyalists. This is a story about family, legacy and finding your place in the world. Reitman handles Ghostbuster with care. Afterlife captures the magic fans are craving for while injecting a hell of a lot of heart. He is obviously a fan and it shows from start to finish.

This film should successfully cross the streams of generations of fans. It is the rare hybrid that attempts to satisfy two audiences and succeeds. Returning devotees will enjoy this natural continuation of a film they hold dearly. Afterlife captures the magic and charms of the original while adding to the mythology. Plus, there are plenty more thrills and surprises to enjoy beyond what I covered here, Gil Kenan and Jason Reitman’s script leaves plenty of room for easter eggs. Newbs will be taken on an exciting and spirited adventure full of enough action and humor to surely create a new legion of fans.

Afterlife is simply a delight. If you go in looking for a grand time, you will find it in this fun-filled nostalgia ride. My recommendation is to try watching it through your once youthful eyes and temporarily remove some of the cynical and ornery qualities that time has burdened many of us with. (If you have not been hugged enough, imagine that you were). There is a great deal of sentimentality at play here and it works tremendously if you let it. Sit back and let the wonderment wash over you. I did and I walked out to the screening smiling ear to ear, eager to share the film with others.

Ghostbusters: Afterlife delivers enough inventiveness while still tuning into the spirit of Ghostbusters past. It never forgets its roots while adding a new chapter to the story. As the father, Ivan Reitman, passes the torch to son Jason, the franchise seems to be handing itself over to a new generation of fans. I’m not sure where the franchise goes after this, but I am excited to find out and to share it with my family.