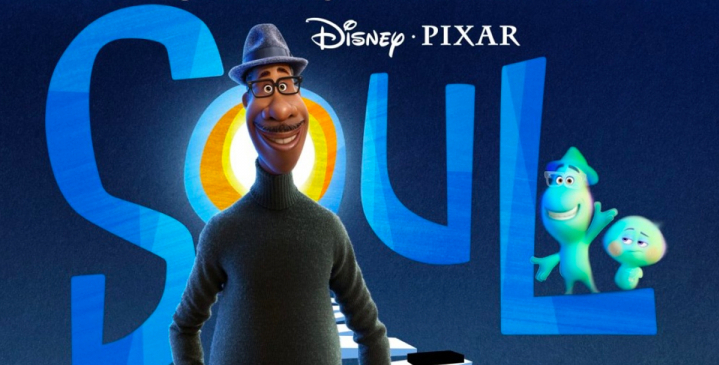 After much delay due to COVID 19, Disney/Pixar’s Soul has finally hit Disney+. While this was expected to be Pixar’s next theatrical blockbuster, an offering on the studio’s streaming service is exactly where Soul belongs.

Joe Gardner (Jamie Foxx) is an unhappy middle school band teacher. His real passion is jazz, though he can’t quite catch a break to make it as a professional jazz pianist. After a successful audition for his dream gig, Joe gets into an accident that separates his soul from his body (he’s not really dead per se, keeping it as family-friendly as possible). Joe is transported to The Great Before, the plane of existence where all souls go before being either reincarnated as newborn babies or are transported to the Land of the Dead. While there, Joe enlists in the souls-in-training program called the You Seminar in a desperate effort to return home to his body. He is partnered with 22 (Tina Fey), a stubborn and reluctant soul who has intentionally spent eons in training, wanting nothing to do with becoming a person.

If the plot sounds a bit convoluted, that’s because it is. Like Ratatouille, Soul requires a certain amount of suspension of disbelief to sell the premise. Unfortunately, also like Ratatouille, that suspension is stretched thin when the plot chooses not to follow basic logic. There needs to be a groundwork of believability on which to build the incredible. I can buy that a rat can talk and cook, but I fail to understand how he can manipulate a person’s movements like a marionette by pulling on their hair. Similarly flawed concepts are implemented in Soul for the sake of moving the plot forward with equally distracting results.

Soul is strongest when it spends time in the Great Before. The backgrounds and character designs are beautifully abstract and incredibly engaging. These scenes are pure Pixar magic. There are some obvious comparisons to be made to both Inside Out and Coco, but Soul’s angle is unique enough to stand on its own. Sadly, most of the film takes place in New York in a cliched body-swapping story crossed with a cliched fish-out-of-water in the big city story (one that seems as though it was lifted from an early draft of Jon Favreau’s Elf, though not nearly as successful). Unlike the Great Before scenes, all of the action that takes place in New York feels more like a Universal/illumination film, down to the character designs. Not that it’s a dig necessarily, but The Secret Life of Pets is far from Coco or Inside Out.

Pixar films as a whole have been known to perfectly blend emotion and humor, but unfortunately, Soul comes up short on both. The subject matter in Soul, coping with life after death and finding ones’ purpose in life, while deep, lacks any real emotion. Pixar, more than any other animation studio (and many live-action studios for that matter) has excelled at creating characters and stories that the audience can relate to on an intimately emotional level almost immediately. Before the first act of Up even begins, we are treated to one of the most emotionally engaging sequences in all of film and done so without a lick of dialogue. Here, the emotion is muted. That’s not to say there aren’t some touching moments, but not what we’ve come to expect from the studio.

The humor falls short in Soul as well. With talents like Foxx and Fey joined by comedic actors like The IT Crowd’s Richard Ayoade and naturally funny talk show host Graham Norton, you would think we’d be good for at least a few laugh out loud moments, but instead we’re given a spattering of light chuckles, at best. I don’t expect every Pixar outing to raise to the comedic level of Finding Nemo, Monsters Inc. and Up, but a few good laughs doesn’t seem like much to ask for.

With jazz being a focus of Soul, we’re treated to some really nice pieces of jazz music thanks to Jon Batiste. His music is a real stand out in the film. I wish the same could be said of the score. Trent Reznor and Atticus Ross do an admirable job, but the score is a far cry from Michael Giacchino’s work, who has composed music for more than a dozen films for Disney, including the Oscar and Grammy-winning score for Up.

Perhaps the greatest disappointment with Soul is that there is absolutely no resolution to Joe’s character arc whatsoever. I don’t mean that in a ‘Well, that didn’t go in the direction I thought it would’ kind of way, but rather in a ‘Are there five minutes missing from the end of the film?’ kind of way. We are left empty-handed, given only a film-ending line of dialogue that appears as though it’s meant to wrap everything up. Upon further contemplation, it is of no real significance to Joe’s story arc at all. His arc, incidentally, seemed relatively obvious from the film’s onset, but someone apparently forgot to tell that to writers Pete Docter, Kemp Powers, and Mike Jones.

Soul is not a dislikable film by any means. It’s enjoyable enough for certain, and the story, while convoluted, has a pleasantness about it that’s very endearing. There are worse ways to spend two hours. However, Pixar has set a pretty high bar, and Soul sadly falls short of it.